Fixing a Broken Garburator in Edmonton

Garburators, also called waste disposal unit or even a food disposal unit, but here in Canada these are best known as garburators.

Garburators have a lifespan of between 8 to 15 years depending on the amount of use and the type of waste you are putting into the unit.

Before I get into how to fix a garbuator let first tell you what you can and cannot put down the unit. Never put onions, egg shells, potatoes or potato peels into your garburator. Onions can get through in long strings that can plug your drain. Egg shells get through the grinding chamber and then can get stuck in your ptrap under your sink. And potatoes and potato peels are very starchy and can cause your drains to clog similar to how grease will clog your drains over time, except much faster.

Other things like non food items and bones should also not go into the unit. Think that if your teeth cannot chew something up then either can the garburator.

In both these cases a simple repair might be an option.

First I ask myself, why is the garburator making noise? Is there a bone, fork, seed or something else making the unit rattle?

One call I went on the homeowner’s son dropped three pennies into the garburator and did not want to fish these out.

Which is a good thing, you should not be sticking your hand down into anything that can mangle fingers and cause you a lot of pain. There is no blades in the traditional sense of the word, not like a blender, but I would still keep my hands out until the power was disconnected by either unplugging the unit or turning the breaker off at the panel.
Back to the client, when she turned the unit on the pennies would jump around inside trying to get ground up but just made a lot of racket. Most are not this easy to fix, but I unplugged the unit and pulled out the slightly damaged pennies.

I have fixed many in this same manner, but this was the first time I pulled out money. (You can tell this was awhile ago since pennies have been gone in Canada for a bit now…LOL)

As with any electrical appliance always unplug the unit before doing any kind of repairs.

My Garburator is not Working

Even though the unit is not working is there any sound coming it? If you have a light hum coming from within the garburator then you know something is jammed inside.  Depending on the age of the unit you might get a service guy from Edmonton to come out and fix it.

Unplug the unit or turn the breaker off at the electrical panel.

Then take the allen wrench that came with the unit or any will do. 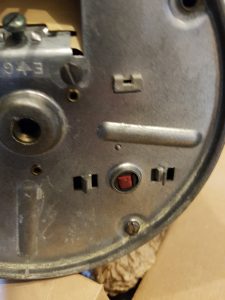 Here is a garburator I took out in a house in Edmonton. You can see where the Allen wrench goes into the shaft and the red breaker button

Place the Allen wrench in the hole at the bottom, center area of the unit. If there is no hole you will need to buy a special tool that goes into the inlet at the top of the unit.

In either case you will want to turn the shaft in both counter and counter clockwise directions to unjam whatever got stuck in there.

This normally removes the debris, but if not then most likely you need to get a new garburator.

If after doing this you turn the unit on and now you hear something bouncing around you will need to unplug the unit again and fish out whatever is in there. The debris will be small so you might need a flashlight.

If you turn the unit on and everything is working then you just fixed your garburator yourself. Feel free to post a comment on my Facebook page at kramerplumbingandradiantheat.

With the garburator in the off position press the red button at the bottom of the unit, This is a breaker that will sometimes flip off.

If you turn the power on and it works then great! If not then try checking the breaker at the electrical panel.
If that does not do the trick then you need a new garburator.

If for some reason this works but keeps blowing the breaker on the unit or at the panel then the motor is drawing too much current for some reason and you will need to replace the garburator.