Piping for drainage systems comes in many different forms as even the most
inexperienced/uninterested homeowner is aware.

Edmonton and the surrounding area is relatively new from a north American city standpoint.
Most of our residential buildings were built from the mid-1960’s onward. The density of each era
of building construction varies greatly by neighborhood, just think of the difference between
Glenora and Windermere, or Ellerslie and Jasper Place.

In my many years of service experience, the majority of homes that I have worked at have had
either plastic drainage or copper with cast-iron “stacks” (stacks are a vertical section of
plumbing pipe for drainage and venting, that continue through one story or more).
In this post however, I want to discuss a less-seen and unfortunately less-understood form of
piping known as galvanized drainage.

What is galvanized drainage? Galvanization is to apply a protective layer of the element zinc to
steel or iron to prevent rusting (corrosion). The process was named after Italian scientist Luigi
Galvani. Steel galvanized plumbing pipes were used for both water supply and drainage pipes
between 1880 and 1960.

As with many other piping materials that have since been prohibited (asbestos cement,
polybutylene B, and lead are a few examples) galvanized plumbing materials at first seemed
like a strong improvement over predecessors, but after several years in service the fatal flaws of
the design became clear.

The zinc coating on both the inside and outside of the pipe would separate with time and flake
off. This would lead to exposure of the raw steel or iron to the atmosphere, add water (hence
plumbing) and rust would soon be a major issue.

In the case of water lines, this would commonly begin with visible calcium buildup (a dissolved
solid in our water systems) near threaded joints and fittings. Weaks spots were more likely to
occur in these locations because as a metal pipe is threaded the die heads groove a “taper” into
the walls of the pipe, thus making the walls less thick and therefore less strong. Left unfixed,
these small leaks would continue to oxidize and eventually fail as a larger opening for water
pressure to escape would be made usually leading to large scale flooding and other property
damage.

Since drainage does not withhold the same amount of pressure that water distribution lines do
(approx 2psi with pipe full for drainage vs. 50-70psi for water distribution) they weren’t likely to
burst and cause a major flood. What these pipes were much more likely to do is cause stubborn
and recurring blockages, this is because the zinc flakes would combine with the contents of the
drain itself, harden, and form a nearly impossible to remove sludge that is more similar to a brick
mortar than a bag of wet fertilizer. In my experience, the worst cases of this situation have been
the trap arm pipes for bathroom basins (a trap arm is a horizontal section of pipe that begins at
the outlet of a p-trap and ends at its connection to its vent). This is likely because a bathroom
sink contains more soap suds, hair, and toothpaste than the mostly organic waste discharged to
a kitchen sink.

In summer of 2019 I did a service call in a house around 87street and 118 avenue in Edmonton,
the house was probably constructed around 1957. The client was having issues with a slow
draining bathroom sink for both the upstairs tenant and the basement suite renter. A contractor
had come 2 months prior to clean the drains but the problem was reemerging.
The first thing I did was remove the traps and inspect for blockages in the form of hair, straws,
soap, etc… they were clean. When I attempted to cable (which is to send an auger line through
the drain) the line, my snake would only go about 2 feet into the pipe inside the wall and then
become very difficult to move further, a few times the head bounced backward against the resistance and knotted my cable up. 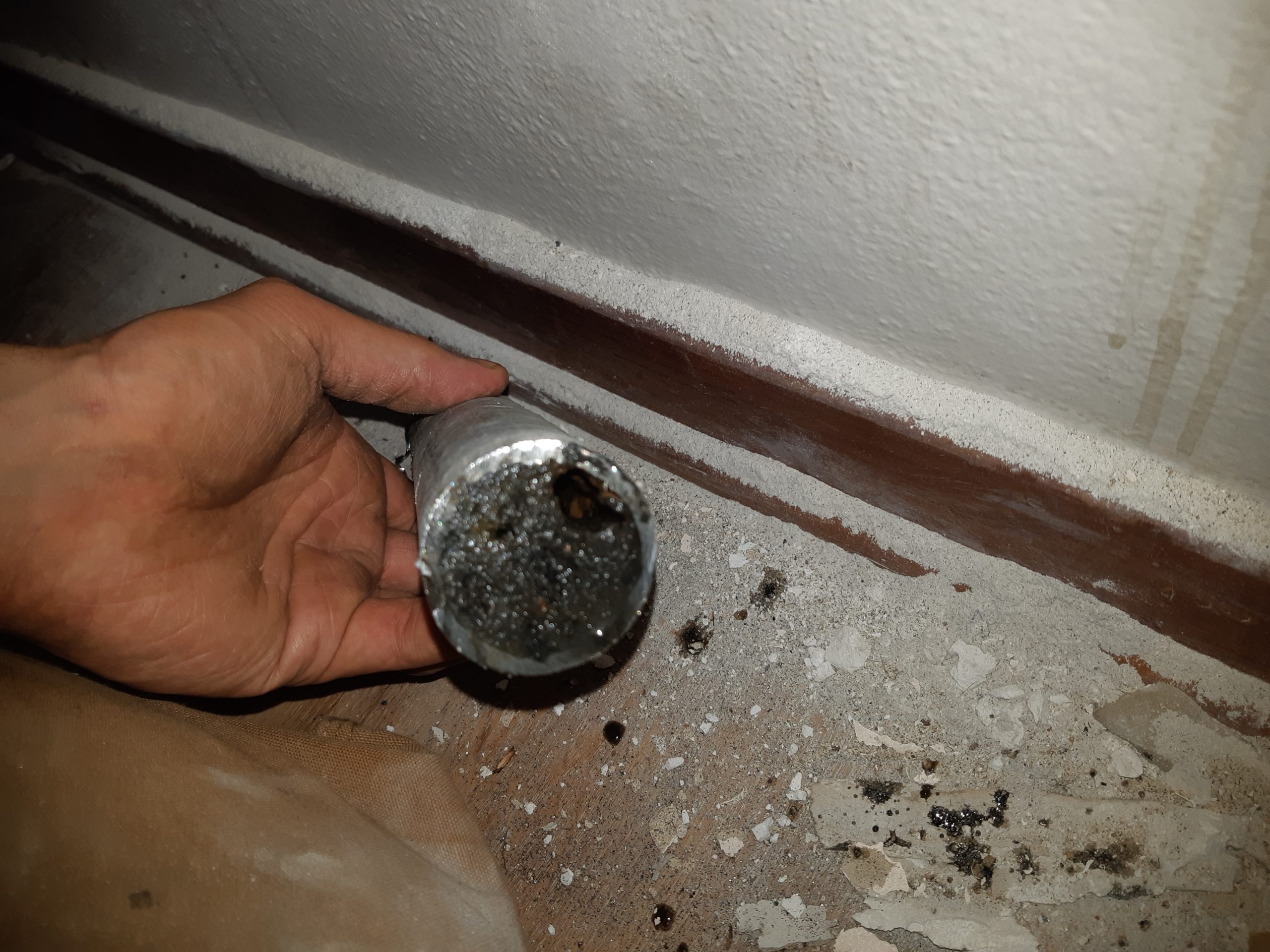 I went to the bedroom which shared the plumbing wall and cut an access space in the
wallboard. As soon as I could see the plumbing exposed I knew the stoppage in my cable travel
was because I was sending it through an undersized, and very old galvanized drain.
In my experience I knew that the only real solution for galvanized drainage and water lines is
total removal and replacement. However, given that this was an old property and the owner
simply needed a fix for his tenants, this was out of the question. 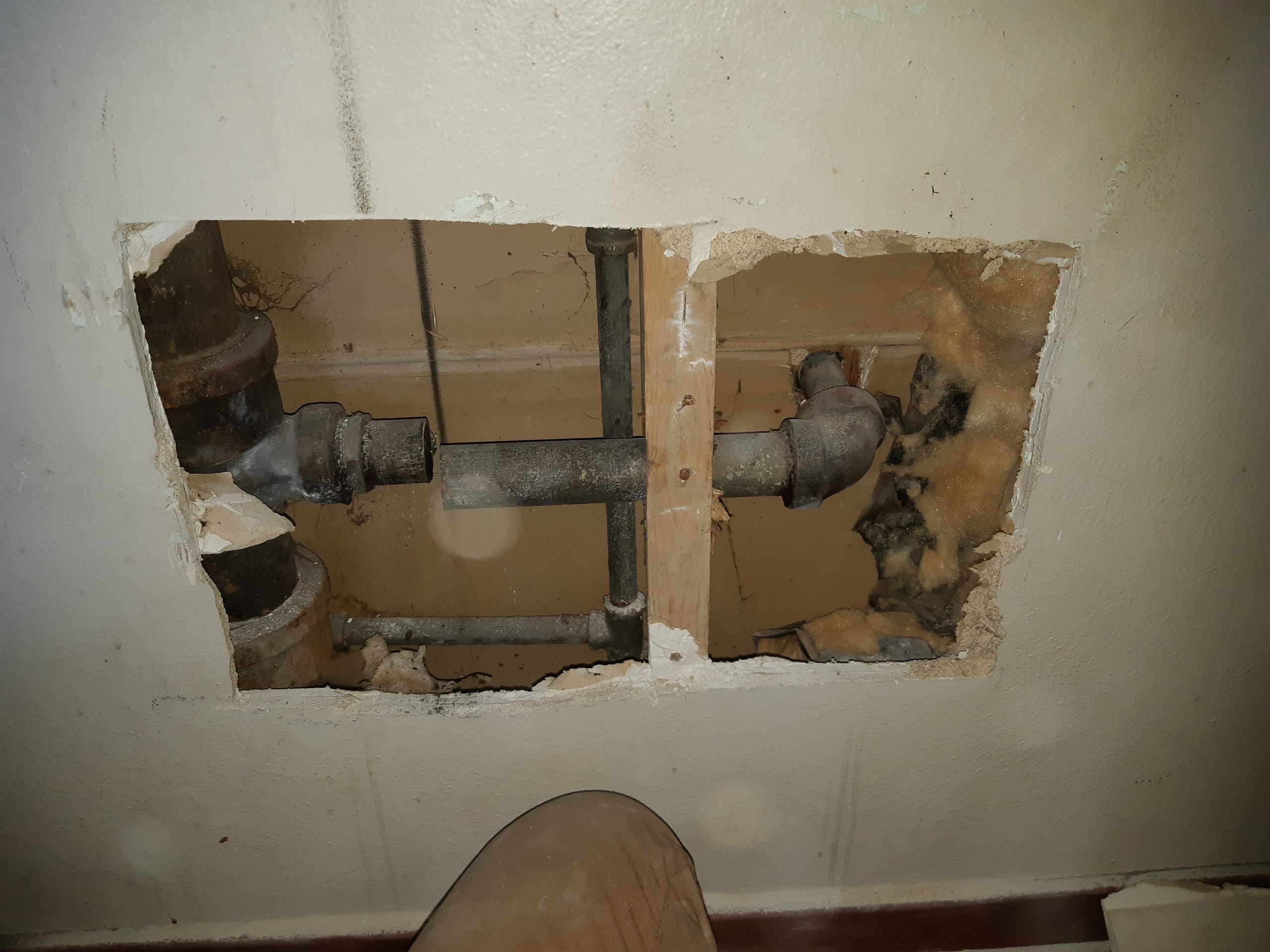 In the pictures you can see that the horizontal pipe that was removed was tied into a vertical
pipe that was also galvanized. Given that most of the sediment from drainage settled on the
horizontal section of the drain, I opted to remove and replace it with ABS plastic pipe.
After I grinded off the section from within the wall, I could take a look inside, what I saw was an
almost entirely clogged pipe with a small hole that was made from my cable head. The blockage
was so rigid that my cable was unable to whip around and dislodge it. Since it would have been
exceedingly difficult to replace the tee on the stack pipe,

I instead cut near the branch with enough space left to install a mechanical fitting (in this case, a fernco, a rubber coupling with a gear clamp on either end to aid in removal and installation) to transition to ABS.  Even with easy access to the inside of the branch pipe, I still required a flathead screwdriver and a hammer to chip out the blockage.

After I had installed the new pipe in the wall, I replaced the p-trap and trap adaptor underneath
the sink and “stress tested” the drain (which in my case is a full sink full of water followed by a
full 5 gallon pail), it drained perfectly and there were no leaks. I cut a piece of glazed mdf and
used it to cover my access hole. I repeated this process for the downstairs sink successfully.
In the details of the invoice and a discussion over the phone I explained to the client in detail
what caused the recurring blockages and the realities and future issues galvanized pipework
would hold. It has been almost a year of steady use and he has not encountered another
problem with those sinks (or his house at all, but that’s another matter). 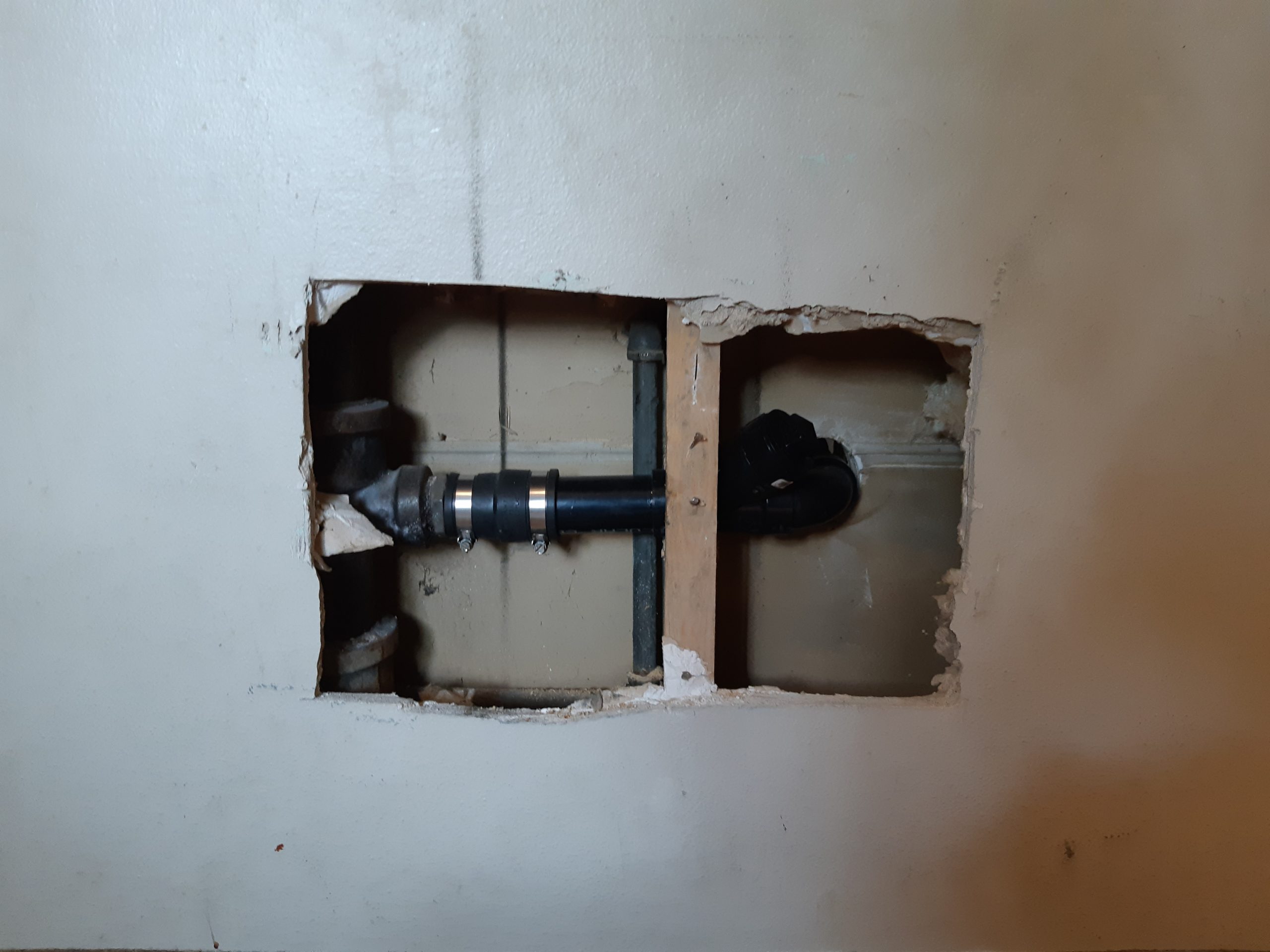 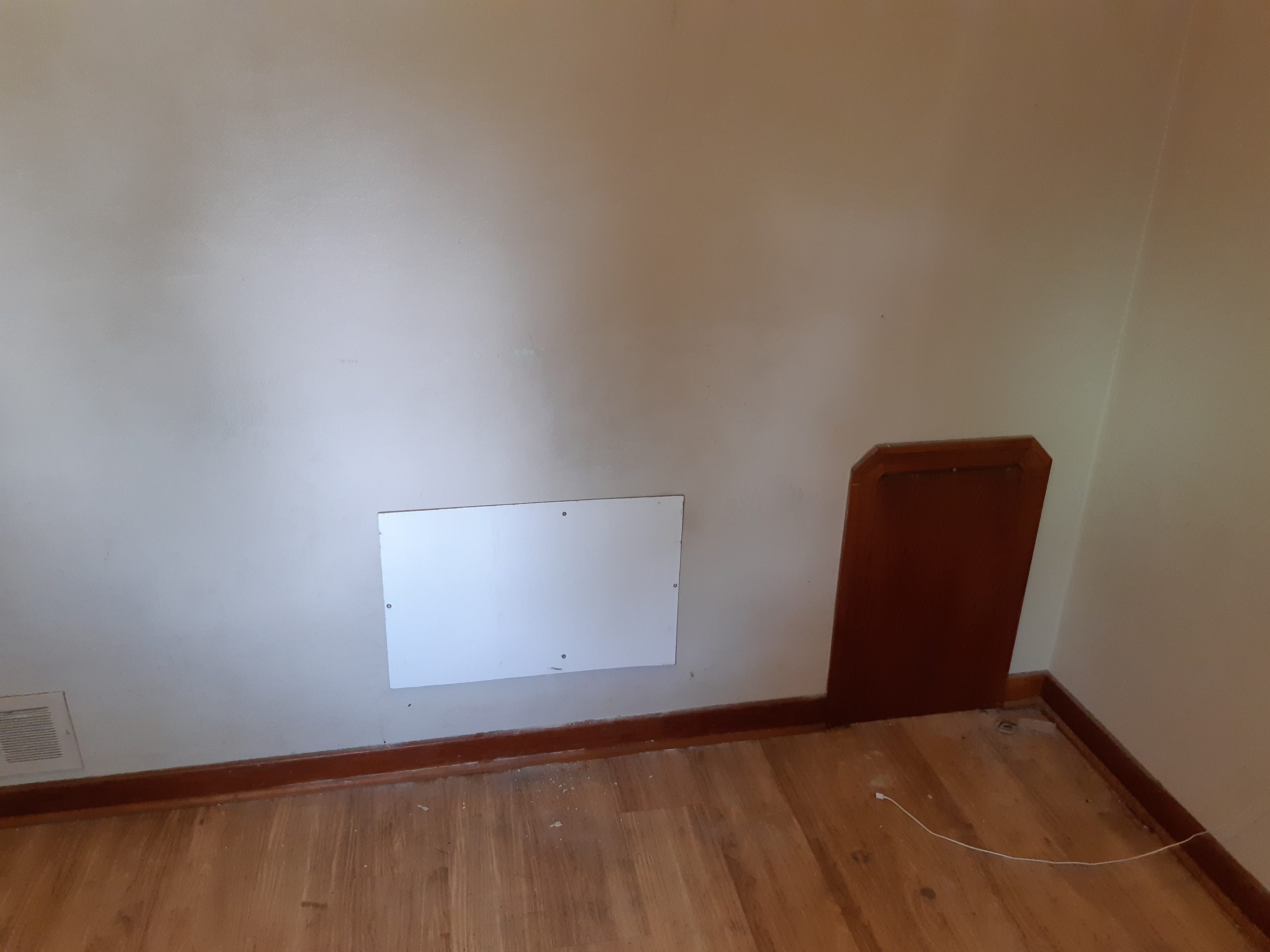 If you would like to know more about galvanized or any historical piping in your home and what
it means for you as an owner, or you need any plumbing or gasfitting service and help give us a
call at: